Fuze Ecoteer has been working in Merapoh since 2013 and has been supporting the Malayan Rainforest Station (MRS) since 2018 when they started their Rainforest conservation research project. In September 2018, MRS split its project into two key components – Conservation and Research Unit and Community Development & Empowerment. This enabled MRS to focus on establishing its research credibility, and also allowed for more focused initiatives in local wildlife conservation, raising awareness and introducing capacity building programs. Collaboration is the key to MRS’s success, hence they work closely with Universities and local Wildlife agencies.

to promote conservation from evidence-based data and through active participation of local communities as a holistic and sustainable approach.

If you want a career in rainforest research & conservation then an internship would be suitable for you. Especially bird lovers.

Join the team in the rainforests of Merapoh and Sungai Yu on conservation treks looking for signs of animals and human encroachments. You can join for as little as a day or as long as 8 weeks. This project is suitable for people looking to get down and dirty in the rainforests conducting basic monitoring and treks.

Find out more detailed information about MRS below

MRS is focusing their Rainforest conservation research projects in Merapoh, which is a small hub town with several villages in Lipis district of north Pahang, Malaysia. The town is surrounded by a myriad of uniquely formed limestone hills, outcrops/caves with large internal structures and carvings, which makes it a popular attraction for both local and foreign visitors. Besides, these natural structures are also significantly valuable for scientific research and making discoveries; fossilized remains of Early Triassic species was discovered recently at a limestone hill in Merapoh.

Most importantly, the Merapoh area and its surrounding forest complexes are part of the CFS-PL1 – Sungai Yu Wildlife Corridor – an area of special interest and is considered as one of the most crucial linkage connecting two of the main forest complex in Peninsular Malaysia, Taman Negara National Park and the Main Titiwangsa Range.

Both forest complexes are part of the tropical and lower montane rainforest ecosystems, a treasure trove for flora and fauna biodiversity. As such, Taman Negara is home to a wide range of species, and even rare mammals such as the Malayan tiger, Malayan tapir, Asian elephant, and majestic birds such as the Malayan peacock-pheasant and the Great Argus Pheasant, which are still found here in good numbers.

The Sungai Yu wildlife corridor is also a part of the CFS-PL1 area, which functions as a passage, a gateway for different fauna species to access different habitats for food, shelter, mating, territorial rights, etc., which contributes to their persistence – more genetic variation and diversity within the region. Similarly, when the corridor is used by animals, they can also act as pollinators assisting with seed dispersal of wild flowers and plants.

MRS plans to conduct a long-term ecological and population study on the Mainland Clouded Leopard (Neofelis nebulosa) in the Merapoh Forest Complex. Although the study species is listed as Vulnerable, little is known about their natural history or ecology, since most studies generally tend to focus on more charismatic and flagship species.

Hence, there is a crucial need for our research at this stage; to understand the ecology and population status of the clouded leopard for the implementation of better conservation strategies and raising awareness in Malaysia. MRS plan to collect data using camera traps, which is a non-intrusive and unbiased method to record animal presence and activity. They will also collect scats for our dietary analysis of the study species.

Papers published by MRS and partners

Checklist and Diversity of Herpetofauna in Merapoh

Currently, there are lack of recorded collections or past studies on the list of amphibian and reptile species found in Merapoh. Hence, MRS plan to conduct surveys to compile a list of all Herpetofauna that can be found in the area. The identification records are compiled for their herpetological collection, and further to conduct research and publications.

MRS plan to study and record observational data on the parental behaviour of the Rhinoceros Hornbill in a fragmented forest patch surrounded by agroforested plantations. Their local indigenous guide has kindly assisted them in finding the location of the Rhinoceros Hornbill Nest, and will continue finding more nests to be observed in the future. As Hornbills rarely visit disturbed sites and plantations, this creates an opportunity for the MRS team to study more on the effect of land-use change to Hornbill nesting behaviors.

MRS conduct regular patrols within the CFS-PL1 area to collect data on encroachment activities and animal signs that utilizes the area. All data will be shared with the respective authorities and MRS plan to explore new routes and areas within the site to cover a bigger scale that is crucial for conservation of CFS-PL1.

MRS is aiming to set up a CCA managed by the local community on their initiative. The CCA could be owned or leased to the locals, which can result in better on-site management via local poaching surveillance and patrols. Also, CCA can be used to generate income through ecotourism and trading of forest goods and services.

Currently, MRS is in the process of creating a forest usage map for establishing a CCA. Here, they will be recording the movement of the local indigenous tribe, the Bateq people in the forest, along with mapping different areas with wildflowers and plants that have medicinal value, or research potential. MRS is currently working with Dr Suganthi from University Malaysia Kelantan (UMK) to investigate the usage of wild ginger in traditional medicine used by the Bateq.

MRS is in the process of starting its BCB program, where they will train a few members of the Bateq to build field surveying and conservation skills, i.e., species identification, scientific approaches for data collection using GPS and camera traps, and basic data analyses and data implementation. MRS aims to combine both the Malay and the Bateq to conduct joint anti-poaching surveillance and patrols while assessing the methodology for any issues or improvements.

In September 2018, The Malayan Rainforest Station split its project into two key components – Community Development & Empowerment and Conservation & Research Unit – to establish research credibility, allow for more focused initiatives, and ensure that both wildlife conservation and community empowerment receive equal weighting, since they are interrelated and equally significant.

Initially, the community project started in 2014 as part of the Rainforest and Conservation Project to provide the Bateq people with basic education, economic empowerment and support cultural and historic preservation of this indigenous tribe. Over time, the project has gradually evolved along with its primary aim, which now focuses on bridging the cultural gap between the local Malay population and the Bateq.

To address this core issue, both projects plan to

You can support the Fuze Ecoteer projects and supported organisations by buying their merchandise.  A minimum of 60% of your fee goes directly towards the conservation cause linked to that product.  The other percentage is used for production costs. 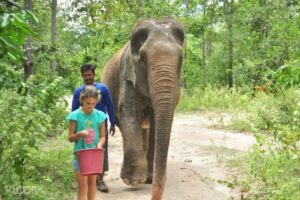 Write to us now!
Scroll to Top